Meditate with Your Dog! It really works!!!

The idea came to me this past fall. I was at home recuperating from a broken ankle. If you or anyone you know has ever had a broken ankle, you can understand my sheer misery. I was in a non-walking cast for 5 weeks. I scooted around on my bum most of the time and hopped around with a walker. Needless to say when everyone was at work, I was stuck in my recliner. Being the antsy person that I am, I tried to do as much as I could with one leg. Cooking was difficult but I had strategically placed tables and chairs in a sort of makeshift assembly line, from the kitchen to the living room so that I could hop on one foot and carry my food short distances from chair to table until I had arrived at my destination with something to eat. It was tedious and exhausting but most of all it was frustrating! I became agitated quickly and had a very short temper.

I was so wrapped up in my own drama and feeling sorry for myself that I didn’t even realize that my Aussie Shepherd Jazz was suffering as well, but on a different level. You see, she was a rescue and I was her fourth guardian. When I adopted her about 8 months prior to my fall, I promised her that my home would be her final forever home, that I would protect her from harm and always look out for her best interests, but most importantly, I’d have patience with her. I realized after the first torturous week of being home that I was releasing my frustrations out on the ones closest to me, my daughter and my Aussie. I realized that I had broken my promise!

When I realized this, I felt ashamed. At least my daughter could defend herself! She had a voice of her own and could communicate with me. When I looked down, there was my Jazz, sitting by my walker, toy in her mouth, like a peace offering. Even though I had raised my voice to her when she was “in the way” or yelled at her when she jumped on my bed and aggravated my leg or even when I shooed her away when she wanted to sniff and lick my cast over and over, she was still there, right beside me, ready to play, ready to be loved.

I began to cry because I realized that I had committed the act that I criticize so many others for. I was impatient and frustrated with an animal who only wanted to love and protect me. Yes, at that precise moment of realization I gave her the biggest hug I possibly could and invited her to join me on the couch.

I understood that I needed to focus my energy on a way to solidify my bond with her even more and learn to keep my annoyance in check. Afterall, she was only interested in love. She had been through so much. She still whined when the doorbell rang and shied away from other dogs. She sometimes still flinched when someone raised their voice!

Since she was a rescue, she was still adjusting to our home. I had worked diligently with her to come up with calming techniques to reassure and soothe her. As a canine massage practitioner, I had put her on a schedule of 3 massages per week accompanied with soothing music. She was on a special Bach Flower tincture and I faithfully used their Rescue Remedy and performed Reiki on her at least once a week. I had been so proactive. What had I done?

I decided that there had to be something that I could do to help her.

As I sat there thinking, I realized that I should try meditating. I hadn’t been a very diligent meditator in the past but it couldn’t hurt! I had done it many times, but hadn’t set up a regular schedule for myself, When I had meditated, it was always in my “special room”; the room where I performed massage. There, I was able to close the door, pushing out any distractions, including dogs with bones who wanted to play! Well, I had no choice. That room was currently off limits since it was downstairs. I had to make do. 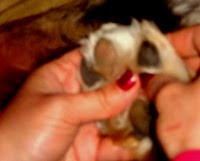 I put in my Music as Medicine CD by Nawang Khechog and was getting ready to have at it., then a funny thing happened…..my Jazz recognized the music and went into massage position! I thought, oh no, I can’t do that right now, I can barely sit up straight. As she lay on the couch next to me, I held one of her back paws. The connection was instant and it seemed to calm her. As my breathing became more relaxed, so did hers. Soon her breathe was matching my own! She was relaxed but not asleep. She was feeling my energy, my calmness, she was actually meditating!
I gently stroked her paws, making slow circular motions mostly out of habit. She lay there, calm as can be, relaxing and feeling the joy of calmness. I started speaking softly, telling her she was a “good dog” and a “happy dog”. I told her a story about her and I walking through the park, laughing and playing. About 30 minutes later, we finished our meditation and I know that she felt just as refreshed and alive as I did.

Our meditation sessions became a daily thing, sometimes lasting the entire length of the CD, other times, only 10 – 15 minutes. I had taken our bond to the next level. We had connected on a level that not many humans and animals have experienced together.

Since I’ve recovered, we continue to meditate together. We routinely meditate 4 days per week and she still gets her massages and Reiki. My daughter tells me she feels she has now been replaced, then we laugh. My Jazz is such a vital part of my life in body mind and soul.

I invite you to experience this same joy with your dog.

Please join me on a journey like no other! I promise you and your dog will not be disappointed!

If you'd like information about our ongoing meditation sessions for you and your dog, please contact me at 416-452-1588 or at fortheloveofhope@ymail.com
Posted by Vicki Sutkowski, CMP, ARP at 2:35 PM