According to the National Institute for Mental Health (NIMH), "Post-Traumatic Stress Disorder, PTSD, is an anxiety disorder that can develop after exposure to a terrifying event or ordeal in which grave physical harm occurred or was threatened. Traumatic events that may trigger PTSD include violent personal assaults, natural or human-caused disasters, accidents, or military combat."

I firmly believe that all shelter dogs, not just some, experience PTSD whether mild or severe in nature. Let's think about this for a minute. A shelter dog's story can vary greatly. We've all heard the stories and a lot of us have experienced the aftermath of the abuse first hand. Shelter dogs can be sent there from a puppy mill, from an elderly guardian who can no longer care for them, as a stray someone found on the street, from an abusive situation; the scenarios are endless. In any case, the dog has become a victim. Cast away on some level to be placed in a foreign location with other highly stressed dogs and put in a cage.

Most shelters do an amazing job of working with these dogs to promote socialization skills, correct unhealthy behaviours and work diligently to get these dogs adopted, however their funds, time and abilities are limited. The psychological stress for some dogs, can just be too much.

Often times the dog will be given a physical exam by a veterinarian. At some point someone will spend some time with the dog to assess the dog's ability to be adopted. If that dog doesn't pass the test, the dog could possibly be euthanized. All I can say, is Google the stats on that one!

The poor dogs that we give up on, abandon or otherwise fail by not meeting their needs are ripe for developing PTSD.

Many of my clients seek me out because they realize that the traditional therapies may not be working or they seek other non-invasive ways of treating stress. After a bit of probing about the dog’s history, if they know any of it at all, it most often reveals emotional issues which have caused the stress and anxiety and in most cases PTSD.

By understanding temperament, known history, behaviour problems and the dynamic in the home (all of which can only be seen IN THE HOME), we can prescribe an effective treatment plan to help with the problem.

Even the dogs that suffer from severe PTSD can be helped. With a combination of therapies that is specifically prescribed for the dog, you can alleviate and sometimes remove all signs of PTSD. Doing this requires patience, love, understanding and the realization that it’s most often 1 step forward and 2 steps back for a while until you connect with what works. Even dogs have those “Aha Moments” and when they have them then it’s full steam ahead.

If you think your dog is suffering from PTSD, here are some common symptoms to watch for:

* increased stress and anxiety which manifests itself by breaking the house training barrier
* whining
* barking
* howling
* hiding for no known reason.

These dogs may also show signs of unmerited aggression such as snapping for no reason or a low guttural growl when being approached.

I firmly believe that it most cases, anti-anxiety medications can be avoided if patience, persistence and the right therapies are used. Check out my blog for more holistic therapies which are a great fit for PTSD. These include massage, music therapy, Reiki, Bach Flower Remedies and Relaxation Therapy. 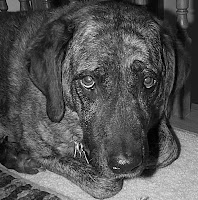 If you think your dog is suffering from PTSD symptoms, there are things you can do immediately until you can seek professional help, such as:

• Create a safe and quite place for your dog so he can just be alone.
• Place a favourite toy or a piece of your clothing in his safe place to soothe his anxiety
• Play gentle classical or harp music is best for a soothing environment

Then, get your dog the help he deserves!
Posted by Vicki Sutkowski, CMP, ARP at 2:50 PM